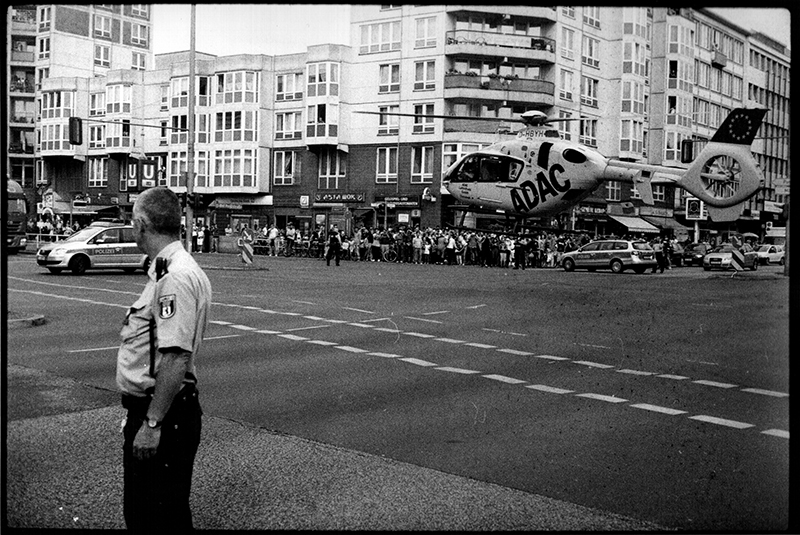 Helicopter on a street corner in Wedding, Berlin. RPX 400 stand developed in Rodinal.

Film Recipe: Rollei RPX 400 in Rodional 1+100 for 1 hour, agitate softly in the beginning and at the half hour mark.

The recipe for stand development is simple. Put your film in the tank, mix your Rodinal at 1:100, and go. The development tank needs a little agitation at the beginning to make sure it is evenly distributed, and be sure to bang out the air bubbles well. Let it sit for an hour. Then come back after dinner, and stop & fix as usual. Be sure to use a film development tank large enough to hold two 35mm films (or one 120 film): Rodinal needs at least 5ml in its working solution, which you won’t have with this thin dilution in a single-roll film development tank.

Some people let it sit for as little as twenty minutes (gasp!), while others have reported letting it cook in the fridge for three weeks. It doesn’t matter all that much.

I went for a semi-stand development method here, where I gave the film development tank a shake at the half hour mark. Some people feel strongly about doing or not doing this. In my case, I am nervous about an air bubble wrecking a shot and decided to cut my losses. My thought is that there won’t be much practical difference between a half hour and a full hour development time, but a bubble would rain on my parade.

The shot here came from a camera that someone gave me, and I didn’t know if it worked at all. Does. Of course, I didn’t learn how accurate the shutter is by doing this.

One of the really cool things about stand development is that you can change your ISO mid-roll and not worry about push or pull development. So you shot that same roll of Tri-X at 200 when it was sunny, 400 when it was cloudy and 800 at the party that evening? Rodinal 1:100, 1 hour.

There are downsides to stand development. Plenty of ’em. Stand development is a one-size-fits-none procedure. Although it will always work, it will never give you the best possible result. Rodinal is excellent for tonal rendition (dynamic range) but on the grainy side, and stand development takes that to the extreme. It develops over a huge tonal range, hence working regardless of the film or exposure. And it pulls the grain out, strong.

That helicopter shot should be perfectly exposed in broad daylight (that looks like 1/500s to me). The scan is from a silver gelatin print, enlarged to18x24cm (7×9″). There should hardly be any grain there. But there is a ton. In this case, I like the effect quite a bit. It matches the lens quality on my dear Yashica 35 Electro. And the absurdity of a helicopter in the middle of a busy intersection in Berlin.

Interested in learning more? Check out the courses and workshops offered here.